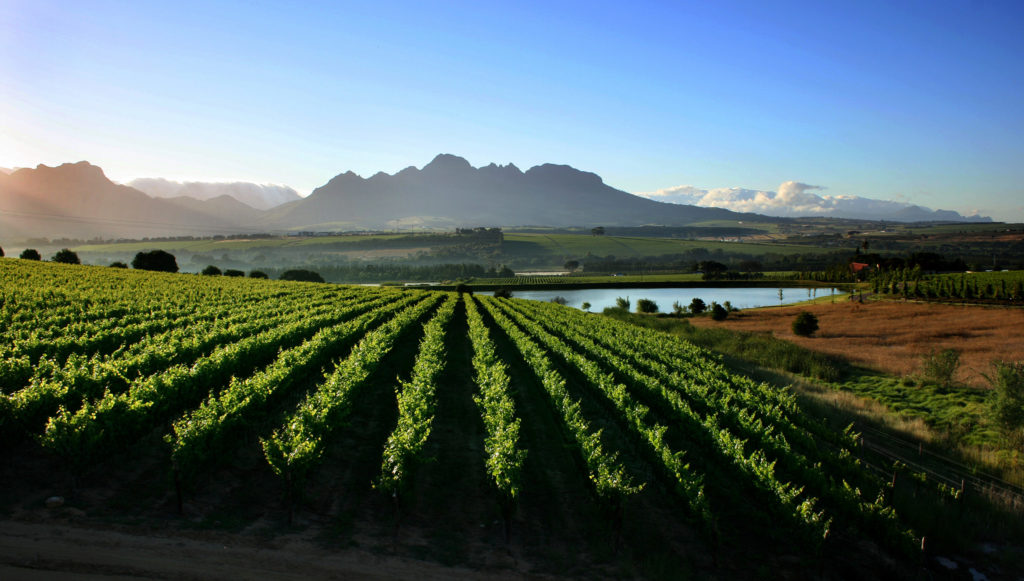 Stellenbosch holds the honour of being the most well-known town in South Africa. History, culture, natural beauty, sport, education and wine has made the name ‘Stellenbosch’ resonate around the globe as one of South Africa’s premier tourist, wine, business and education attractions.

The recorded history of Stellenbosch dates back to 1679 when this name was given to a small island on the Eerste River by Simon van der Stel, the then governor of the Cape. It can, however, be assumed that prior to its official naming, the Stellenbosch surrounds were home to various indigenous communities.

The Eerste River, which today still ripples through Stellenbosch, was so named as this happened to be the First (‘Eerste’) river the Dutch settlers came upon after leaving their Cape Town base.

After its discovery, Stellenbosch was quickly identified as an area in which to settle, with great potential for agriculture. The surrounding areas proved rich in soil and correct climate for producing vegetables to sustain the ships passing by the Cape of Good Hope en route to the other Dutch colonies in the East. Add to this the thirst of the Dutch and other settlers that necessitated the making good wine, Stellenbosch soon saw its hills and valleys also planted to vines along with other agricultural crops.

That skilled vintners were sent to the area and the vines bore wonderful fruit is proven in the fact that, to this day, Stellenbosch remains world-renowned for the quality of its wines, with the vine being by far the region’s most prominent agricultural feature.

With the rich agricultural pickings, the early settlers soon established a bustling town. The earliest building in the Stellenbosch area dates back to 1689 and can still be viewed on the historic wine farm of Muratie. In the town itself, solid, white-plastered buildings arose and the streets were planted with oak trees, giving it the name Eikestad (Town of Oaks), which is still used to describe the town today.

Besides its rapid growth in becoming a centre for the flourishing wine industry, the foundations for Stellenbosch’s heritage as an educational centre were laid in 1859 when a theological seminary was established. In 1918 a university was founded, and to this day the University of Stellenbosch remains an internationally recognized education centre and one of the leading universities on the African continent. It is also one of two learning centres in South Africa that trains fledgling wine makers – the other being the Elsenburg Educational College outside Stellenbosch.

Although Stellenbosch has seen rapid residential and commercial growth over the past few decades, the heart of the town still resonates with an historical atmosphere and cultural allure. The buildings reflect over three centuries of occupation, including Dutch, Georgian and Victorian architecture. A myriad of museums and places of interest are found along the oak-lined streets. And the crests of the dramatically rising mountains that encircle the town – namely the Stellenbosch, Jonkershoek and Simonsberg mountains – are always visible.

Besides its status as a leading cultural, education and leisure destination, it is wine that has made – and continues to make – Stellenbosch famous.

The region’s potential for producing quality of the wines and as a tourism hub has seen investors from as far a field as France, Germany, Switzerland, Italy and America staking their claim in the Stellenbosch winelands.

In 1971 Stellenbosch became the first wine region in South Africa to establish a wine route as an organised network of wineries at which the tourist could experience the product of the vine and tune into the soul of the region’s winelands. The Stellenbosch Wine Routes currently provide a co-ordinated network of more than 150 wineries, each offering a unique cellar-door experience for the wine-lover and tourist.

The Stellenbosch Wine Routes include 5 sub-routes which each have their own characteristics in terms of prominent wine styles, climates and geographical location.

As part of the Cape Winelands, the Stellenbosch Wine Routes are part of the six most popular tourist attractions in South Africa and are also connected to the global Great Wine Capitals Network.